Dawna and Helen Talk About Their Friendship 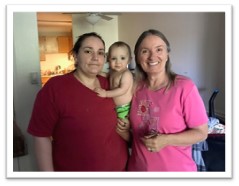 Dawna was referred by Family for You in October 2018. Medicine Center nurse and called A Friend. She was matched with Helen within five hours of calling A Friend for You. Dawna’s baby, Landyn was born in December 2018. Their friendship continues to this day.

Q. How did you hear A Friend for You?

A. Initially I had seen a card hanging at my doctor’s office. Family medicine. However Ashley one of the nurses at the human resource office is the one that pushed me with the suggestion.

Q. Why did you feel the need to reach out to A Friend for You?

A. Because there was so much going on in my life on top of my extremely high-risk pregnancy. As well as deciding to leave the father due to DV [domestic violence]. I was taking on caring for my sister’s children who have been taken away from her at the time 15 and 13 both boys. I didn’t have much support in my life whether that was resources or just someone to talk to, I never had to ask for help before

“Helen’s very resourceful as well as caring, kind, genuine all-around good person. I couldn’t imagine having a better friend chosen for me.”

Q. Who is your Volunteer Friend, and how did your relationship with your friend develop?

A. Helen McKinney… Very nice woman we initially met at a coffee shop and she wanted to know all about me in any way. I could tell she just wanted to help in any way she even if it was in the middle of the night just to talk.

Q. Did A Friend for You connect you with any other opportunities in the community?

A. Helen was always trying to look for connections or what she could do to help me in any way that I may have had an issue or bump in the road whether that was a rash on my skin or something bigger like I had an issue with my car so she even the foot work for me which was a bonus. She’s just awesome.

Q. What kinds of things have you and Helen done in spending time together?

A. We mainly did little things so that we could talk or connect in ways probably a lot of coffee and tea sessions as well as brunch. She attended my baby shower, we even went to a party together a gathering during Christmas time she took me.

Q. How often would you get together?

A. Helen keeps herself busy but insisted that we would get together at least once a week for no less than an hour. If I wanted more or needed more of course I would let her know and there’s a few times we met more or she would just pop in to check on me.

Q. How old is your baby now?

A. Landyn is about to turn 9 months on the 14th of August. I believe we initially met when I was roughly 6 months pregnant.

Q. What did you think about your Care for You gifts…did they help you? (freezer meals and gift package)

A. I thought they were amazing absolutely helpful in more ways than I could even imagine.

Q. Would you recommend A Friend for You to another woman, and if so, what would you tell her?

A. Absolutely I would recommend A Friend for You. I don’t think that it’s some women’s cup of tea but especially if it was a stranger by all means anybody just looking for somebody to talk to you or anything I think it’s very awesome what you do as well as the women that volunteer it fills my heart to know there’s things in place like this to help others.

A. Very non-judgmental but sure does like to share her opinion as well especially if it pertains to your health or your babies. Helen’s very resourceful as well as caring, kind, genuine all-around good person. I couldn’t imagine having a better friend chosen for me.

Q. How are you and your family doing today?

A. My son and I are very good! My nephews have since returned home with their mother. Landyn is very advanced he can already walk, pretty much has been since he was 8 months.

A. I’ve been involved with A Friend for You for a year now.

Q. What about A Friend for You drew you to get involved?

A. My husband and I had been volunteers with the pregnancy center in Kona, Hawaii when we were missionaries there and while there God really impressed upon our hearts about how important it is to offer alternatives to girls and women who find themselves unexpectedly pregnant. When I learned about A Friend for You, I could see myself coming alongside such women and helping them in practical ways, not just for the few minutes that they’re in a pregnancy center but for several months or perhaps years.

Q. How many women have you “friended”?

A. I have had two pregnant friends so far.

Q. What kind of growth have you seen in yourself since becoming a Volunteer Friend?

A. Since becoming a Volunteer friend, I have discovered what it’s like for people who grow up without proper parental protection and guidance. It has really opened my eyes to see just how patterns get repeated generation after generation if no one steps up to intervene or offer friendship.

Q. What kind of growth have you seen in Dawna?

A. In Dawna I have seen tremendous growth. From the beginning she did not want to follow in the steps of her mother and sisters. We both knew she would make a wonderful mother and indeed she has done marvelously. I’m so proud of her. She had many obstacles to overcome and still has, but she seems to set healthy priorities and tackle things one day at a time.

“We both knew she would make a wonderful mother and indeed she has done marvelously. I’m so proud of her.”

Q. Do you still keep in touch with Dawna?

A. Yes, we still keep in touch, although not as often as in the beginning.

Q. Tell me about your most rewarding experience with A Friend for You.

A. My most rewarding experience so far with A Friend for You was during our second or third visit together when Dawna broke down and cried a little. Her ex-boyfriend had been abusive to her and became much more so when Dawna became pregnant. She realized just then that, had she not become pregnant, she may well still have been with him and taking the abuse. So in a very real way, we both realized that this pregnancy not only wasn’t a mistake but it was a blessing and may very well have saved her from a life that she now realized she doesn’t deserve. I could see her self-worth growing before my eyes and it has continued to grow as she raises Landyn and gets ready to be back in the workforce.

Q. What has been the most difficult aspect of being a Volunteer Friend?

A. The most difficult aspect of being a Volunteer Friend is when a pregnant friend only continues to see herself as a victim and finds flaws in any suggestions for help that are given. Happily, this wasn’t the case with Dawna, however.

Q. What would you say to someone who is interested in volunteering with A Friend for You?

A. To someone who is interested in volunteering with A Friend for You, I would say that it’s much like becoming a parent in that you’ll find it difficult at times but there’s little else that is so rewarding. And, if the mentoring part seems to be too challenging, then there are many other ways in which she could help.

Q. Do you believe that A Friend for You is a worthwhile organization? If so, why?

A. I definitely believe that A Friend for You is a worthwhile organization because there just aren’t any organizations like it, that I know of. It’s amazing to see how many pregnant women that are out there who would say they don’t really have any decent friends to walk with them through their pregnancy and beyond. The training and guidelines set in place for mentors are very well-thought out and wise.

Mandy and Marty Talk About Their Friendship

*Our client’s name has been changed at her request and no picture has been provided to protect her privacy.

Jessica and Kathryn Talk About Their Friendship

Jessica was referred by Birthline of Loveland in April, 2022 and was matched with Kathryn within two hours of her call.

Dongxue and Morgan Talk About Their Friendship

Dongxue was referred by Life Choices and called A Friend for You in April of 2018. She was matched with Morgan within one hour of calling A Friend for You. Dongxue’s baby, Summer was born in July 2018. Their friendship continues to this day.

We’re Ready When You Are

The next step is entirely on your terms. We are excited to serve and help you. Let us know at what capacity you would like to be involved with a Friend for You.

Find Us On Socials 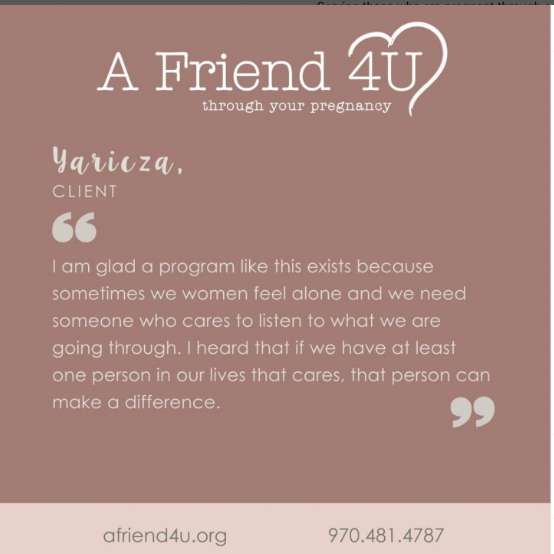 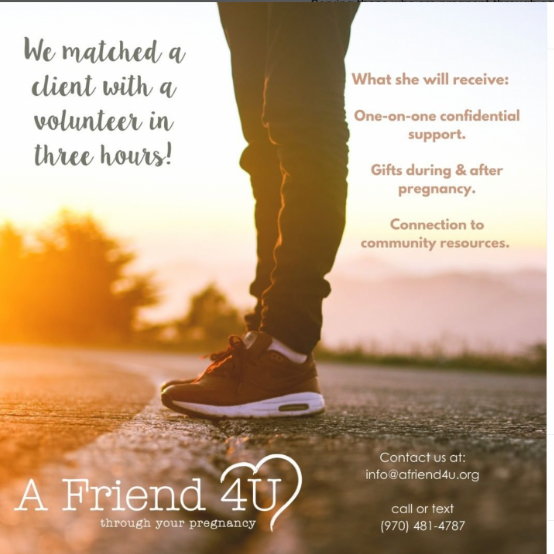 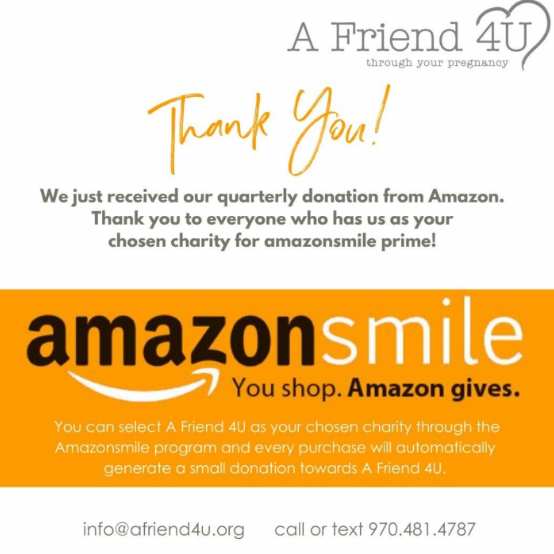 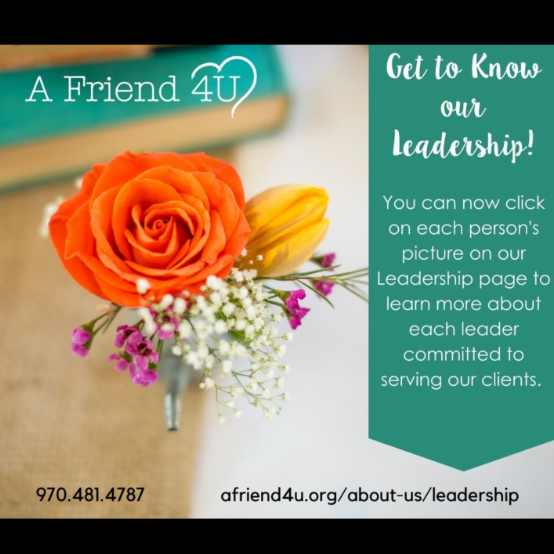 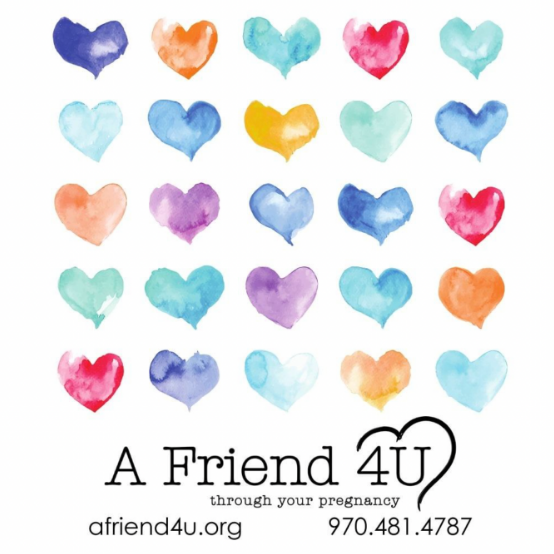